Berwick-upon-Tweed is one of the best-preserved fortified towns in Europe. The remains of a medieval castle crucial to Anglo-Scottish warfare, superseded by the most complete and breathtakingly impressive bastioned town defences in England, mainly Elizabethan but updated in the 17th and 18th centuries. Surrounding the whole historic town, their entire circuit can be walked.

Magnificent viewpoints reveal why Berwick’s castle is on an ideal defensive site. Find out how successive rulers strengthened and expanded Berwick’s defences. Walk around the walls and see medieval, Elizabethan, Tudor and eighteenth century constructions.

Find out how Berwick led the way with fortification design and weaponry. Discover how the townspeople have lived alongside the military for centuries. Look for evidence as to whether Berwick is an English or Scottish town.

The castle is adjacent to Berwick-upon-Tweed railway station. The ramparts surround the town (accessed at various points) 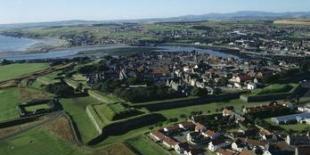