Berkhamsted Castle is located at Berkhamsted in Hertfordshire. The castle is a motte and bailey construction build originally in Norman times. The bailey is large with parts of the curtain wall still standing. The motte stands to one side with remains of the stone tower standing. The keep was a stone tower three storeys high. The castle is surrounded by two moats separated by an earth rampart.

One of the most important early Norman castles, Berkhamsted controlled the northern approach to London, only 30 miles away.

William the Conqueror received the submission of the English at Berkhamsted Castle after the Battle of Hastings. Around 1070, his half-brother, Robert of Mortain, built a timber castle. It was in the classic Norman motte-and-bailey form, with a defensive conical mound and oval bailey.

The castle stayed in royal hands, and in 1155 Thomas Becket was granted the honour of Berkhamsted by King Henry II. As chancellor, he was the king's right hand man and enjoyed great favour. He rebuilt the castle to befit his new status and house his large staff. Becket's buildings probably included the huge stone curtain wall. Later in 1164, during his quarrel with the king, Becket was accused of embezzlement. He was disgraced and the honour of Berkhamsted was removed.

The castle was abandoned in 1495 and destroyed by builders who helped themselves to the masonry. Elizabeth I leased the Manor of Berkhamsted in 1595, including the ruined castle and the deer park, for the nominal rent of one red rose to Sir Edward Carey, Keeper of the Queen’s Jewels. He built Berkhamsted Place on the hill above the castle using stone from the ruins.

The outer gate or barbican was lost in 1838 when the London and Birmingham Railway sliced off the south-western edge of the site. Further damage was caused by and the road to the west in the 1930's. After centuries of neglect the site was carefully preserved by the Ministry of Public Buildings and Works, but now by English Heritage.

The Castle Visitor Room has an exhibition depicting the history of the castle organised by the Berkhamsted Local History and Museum Society. This is open at Easter and for the summer from May to the end of September 10.00-16.00 and by special arrangement during the week for school and other groups. For further details see the Berkhamsted Castle website: http://www.chilternsaonb.org/ccbmaps/1318/137/berkhamsted-castle.html#sthash.efA8AJXp.dpuf 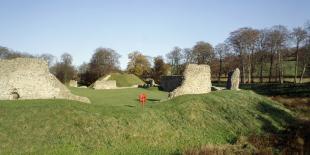 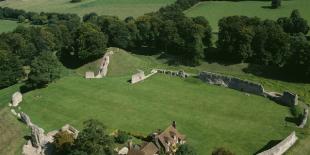