Belas Knap is a particularly fine example of a Neolithic long barrow of c.3800 BC, featuring a false entrance and side chambers. During excavations in 1863 and 1865, the remains of 31 people were found in the chambers.

Other examples, such as Uley and Nympsfield barrows, have strongly emphasised entrances with chambers opening out on either side of a central passage, but at Belas Knap the impressive entrance is a dummy and the burial chambers are entered from the sides of the barrow – when closed and covered by earth they would have been invisible from the outside.

It was probably constructed around 3000 BC and was used for successive burials over a period of years until eventually the burial chambers were deliberately blocked.

Opinion differs as to the reason for the false portal. It may have been to deter robbers, although little in the way of value has been found in undisturbed tomb chambers. Alternatively, it could be that the false entrance functioned as a ‘spirit door’, intended to allow the dead to come and go and partake of offerings brought to the tomb by their descendants.

Although Belas Knap seems in good condition, this is the result of several restorations. Romano-British pottery found inside one of the burial chambers show that it was open in Roman times. It was explored between 1863 and 1865 using the archaeological methods of the time, and some years later was restored by Mrs Emma Dent of Sudeley. In 1928–30 the site was excavated again, before being restored as we see it today.

Villager Community Bus V10 (WO) stops within 1/2 mile of the site. Otherwise Castleways service 606 from Cheltenham to within 1 3/4 miles. 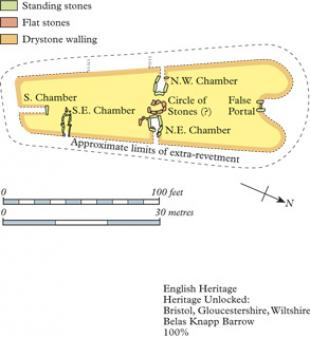