Well preserved remains of a turret used by Roman soldiers defending Hadrian's Wall. Sections of the wall still stand on either side of the turret.

The turret was built to a 2 storey plan, with a first floor reached by a simple ladder. A further l;adder gave access onto the roof of the turret for observation along the wall. The walls of the turret stand to a present height of 1.75 metres.

Excavations have revealed that there was originally a turf wall next to the east wall of the turret. The turret was occupied from the early 2nd century to the early 3rd century AD.

Banks East Turret is also known by the somewhat less descriptive name of Turret 52A. 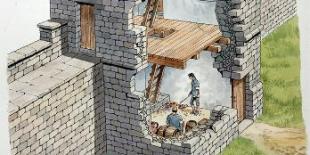