In a spectacular cliff-edge position, this unique Bronze Age tomb had a long and complex history as a sacred site.

Ballowall is a strange and possibly unique example of a prehistoric funerary cairn which incorporates multiple phases of use and funerary practice spanning the Neolithic and Middle Bronze Age periods. Sited on Ballowall Common overlooking the rugged granite cliffs to the south of Cape Cornwall, it faces west towards Scilly and the setting sun.

Ballowall Common has been heavily exploited by miners for the many lodes of tin which underlie this area, and the monument was long been concealed and thus protected beneath mine waste. The site was excavated in the late 19th Century by WC Borlase who was drawn to the site by miners’ tales of strange lights and dancing fairies. Some reconstruction was also carried out at this time with the aim of making some of the interior features more accessible, further complicating the site.

The site which exists today is partly original and unexcavated, partly a reconstruction of what Borlase found during his excavation. Rather confusingly it also incorporates features like the walkway around the central mound and the revetted central space which were built by Borlase so that visitors could see the cists and other features which would be hidden had the site been fully reconstructed.

The individual components of the site are all common elements of Neolithic and Bronze Age funerary monuments but together they form a rare and important example of developing and continuous ritual practices juxtaposed within a single monument complex. No other monument of this type has so far been identified in Cornwall

Ballowall 'Barrow' lies within a landscape rich in prehistoric monuments, settlements and field systems and is an integral part of a continually developing pattern of adaptation and exploitation. The cairn lies between the highway and a public footpath; Ballowall Common is open access land managed by The National Trust. 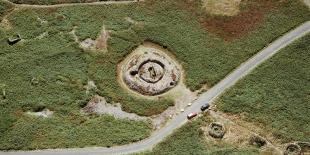 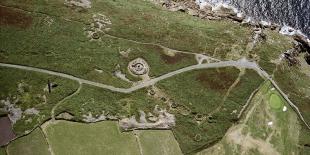