Arthur's Stone is a Neolithic chambered tomb, or Dolmen, dating from 3,700 BC – 2,700 BC and is situated on the ridge line of a hill overlooking both the Golden Valley and the Wye Valley.

An atmospheric Neolithic burial chamber is made of great stone slabs. It is topped by a large capstone, estimated to weigh more than 25 tonnes. The capstone rests on nine uprights and there is a curved, 4.6 metre long entrance passageway. To the south, a stone known as the 'Quoit Stone' bears small man-made cup marks.

The stones would originally have been buried within a mound, aligned north-south and of approximately 25 metres in length with a south facing entrance. The mound is now, however, almost completely eroded and the capstone is broken with a large section fallen from its underside.

The site is defined and protected by a wooden fence. It is seen as a northerly outlier of the well known Severn-Cotswold tomb Group of chambered tombs and one of five Neolithic tombs in the local area. 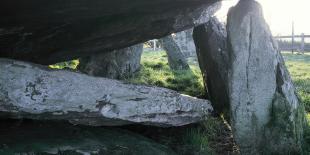 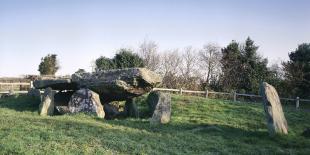