Galava (or Ambleside Roman Fort) was a fort in the Roman province of Britannia. Dating to the 1st or 2nd century, its ruins are located on the northern shore of Windermere at Waterhead, near Ambleside, in the English county of Cumbria (formerly in Westmorland).

The well-marked remains of a fort with large granaries, probably built under Hadrian's rule to guard the Roman road from Brougham to Ravenglass and act as a supply base.

During the Roman army’s conquest of Northern Britain towards the end of the first Century, a small timber fort was built here to house a garrison of 200 men. It was soon abandoned, but the site was redeveloped early in the 2nd Century AD. The fort was demolished and a second one built in stone on an artificial platform which is still just visible. It housed a cohort of 500 infantrymen.

Archaeological excavations by R.G. Collingwood between 1914 and 1920 revealed the remains of the fort’s defences, and parts of the internal building arrangement, including the main gate, the south gate, the commanding officer’s house, the headquarters building and the granaries, all of which may be seen today.

Although the remains lack the majestic location of Hard Knott Fort and impressive structure of Ravenglass Roman Bath House, Galava has a pleasant situation, adjacent to the open area of Borrans Park, at Waterhead, the northern end of Windermere.

Artefacts from the fort are held at the Kendal Museum of Natural History and Archaeology, where there is a tombstone which tells of a record clerk killed by enemy action.

The fort is on land owned by the National Trust, and maintained by English Heritage.

Ambleside Roman Fort is open every day, year round. So next time you’re in Ambleside, walk along to the fort and see it for yourself. 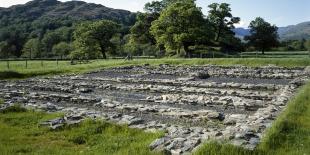