Set high on a hilltop overlooking Abbotsbury Abbey, this sturdily buttressed and barrel-vaulted 14th-century chapel was built by the monks as a place of pilgrimage and retreat.

The chapel is built on a definite platform which could have been originally for a pagan temple. Its position on the top of a hill about 80 m (260 ft) high, overlooking the coast from Portland Bill to Bridport, meant that it was a prominent feature for seafarers. The isolated setting of the chapel granted the monks to withdraw from the monastery during Lent for private prayer and meditation.

In the 16th century the main abbey buildings were destroyed in the dissolution of the monasteries, but the chapel survived, most likely due to its usefulness as a coastal beacon and sea-mark. In later times a navigation light used to be lit at the top of the stair turret. The chapel was repaired in 1742 and the late 19th century, but is largely unaltered.

The chapel is best seen from the viewpoint on the B3157 Abbotsbury to Bridport road, with Chesil Beach in the background. The medieval strip lynchets etched into the side of the hill are known locally as the Chapel Rings.

It is now in the guardianship of English Heritage, and has been Grade I Listed since January 1956. Under the care of English Heritage, the chapel is open over the peak season, with free entry. Abbotsbury's local parish holds several informal services at St Catherine's Chapel during the year, usually in the latter half of the year, from June to December.

Please note: No dogs are allowed, except guide dogs. The site may contain hazardous features.

1⁄2 mile S of Abbotsbury; by path from village, off B3157. Path leads off signposted lane to Swannery 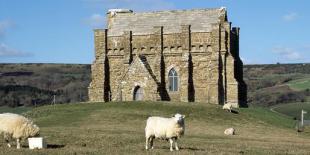 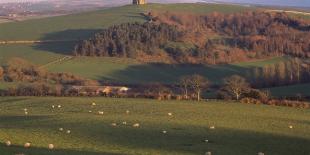